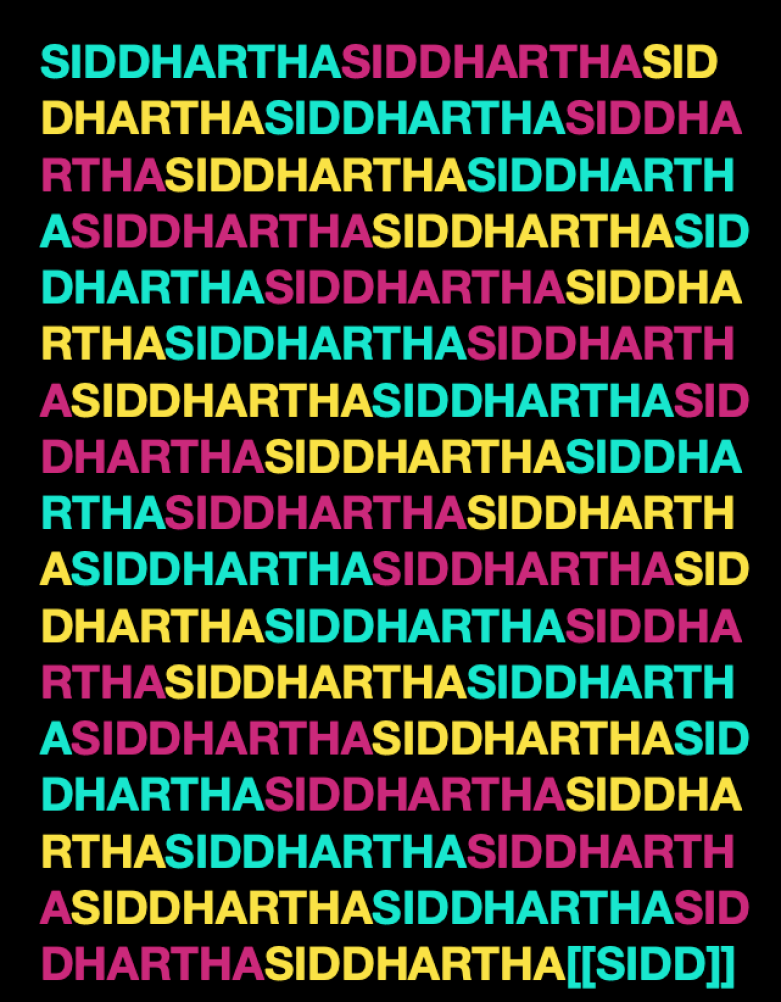 Where the warmth and light of nature intersects the dark and unending path of the imagination, we find Siddhartha. Their determination to unlock the essence of spiritual peace within their heart is under siege from the joys and distraction of the world. Will they ever reach enlightenment? Will they ever find what they are looking for? Through the forests, in the temple, in the smoke filled basements of gamblers, Siddhartha will not yield in their campaign to prove that life is more than belief, more than their possessions, and more than what is on the surface of the skin.

Siddhartha seeks peace, the path of paths. This audio drama will help listeners peel back their outer shell of differences and focus on their inner field of sameness and co-arising. A mystery, a noir, a new take on the novel that led generations of people on a simple journey into life’s most difficult questions is coming to you in the fresh-cut form of audio, soundscape, music, made especially for your stay-at-home entertainment and relief.

An adaptation of the classic novel by Herman Hesse. North Hennepin theatre department dares to hear inside the minds of all individuals in these times of social isolation and uprising.

Siddhartha, a small town kid, son of a priest, is praying with their friend Vin in the local river when it dawns on them that they are in need of a drastic change. They decide to join the hermits in the woods and explore what a life devoted to only spiritual matters might bring.

Episode 2: The Holy One

Siddhartha and Vin venture to the city of The Holy One. They have a chance encounter and find themselves feeling differently about what path to take.

Life in the city brings love and money. Siddhartha finds the love of their life, and falls into a job they don’t really understand, all the while trying to understand what it is about these city-people that makes them so tragic, and enticing.

Decades later, Siddhartha has changed. Their time is spent gambling, drinking, and treating the people around them miserably. How will they find themself out of this darkening trap? Will their friends help? Will the past help? Siddhartha finds themself going in circles in all directions, and will leave anything or everything behind to exit the torment.

Episode 5: The Ferryman + The Child

Sidd finds themself living with an unexpected character by the river. Their past catches up with them when they inherit a child and have to find ways of balancing their pursuit of finding the path of paths with the labor of being a parent.

Siddhartha has an unusual teacher. They are excited and humbled by the chance to find peace at last, regardless of the place and life they wound up living. Things come full circle when Vin shows up again and wants one last favor from their friend.

While considering a production for the Fall of 2020 in the midst of the Corona Virus Pandemic, I had a serious debate with myself regarding what type of performance to create. Should it be strictly entertaining? Should it be about this moment? Should it play into the political or social upheavals? I decided against all of these impulses. I was spending too much time thinking about these things, but needing and wanting a space to simply think about myself, and how the puzzle-piece-that-is-me fit into this crazy upside-down jigsaw of a world. This introspection, and the mandated social isolation, definitely inspired me as an artist. Are we talking about what psychic and spiritual effect this is having on us? Is anyone else out there undergoing massive personal transformation?

Siddhartha is my fishing line in the ocean of ears that are remaining patient inside their houses. I hope to hook and lure anyone and everyone into this beautiful novel by Herman Hesse. He elegantly places an incredible array of spiritual wisdom from a wide cast net of belief systems; next to a simple story of friendship and love, and in doing so creates an unfolding of meaning without a desire to convince or convert. Hesse is playing a game of catch and release, asking you to clearly see certain aspects of your personhood, and then dropping you back into an ocean of questions.

On the other side of this Pandemic, there will be lessons needing to have been learned, both obvious and not. SIDDHARTHA is a piece that helps us learn how to use our mind, our awareness of the moment, and be more authentic with ourselves now and forever. It’s a toolkit to be used for folks to evolve, transform, and grow into a better version of themselves on the opposite end of suffering.

HOW IT WAS MADE

The actors and director met over Zoom and used the built in recording functionality to capture all the voice work. There was zero in person rehearsal for this production. The music and soundscapes were created with field recordings, sampled files from free sound.org and other royalty free sources, digital instruments, and wood flute music performed by Søren. It was mixed and edited in the Northwoods of Minnesota with support from Tamarack Land Cooperative.

iThere are no comments

Begin typing your search above and press return to search. Press Esc to cancel.